Berdehl’s currently known abilities include the power to charge lightning through conductive weapons (such as his steel spear), and a limited ability to call lightning from the sky. Berdehl travels with a group of Metagalapan hawkriders, as well as a personal riding hawk that seems well-trained and especially loyal.

Now come on baby get in

A young hawkrider—only sixteen and just out of training—Berdehl was given command of a small unit of foreign traders to “cut his talons” on contact with the outside world. Normally, an older hawkrider would accompany Berdehl on this simple journey, but virtually every other senior hawkrider is currently busy; additionally, as a Dragon-Blooded scion of clan Alibeth, Berdehl was considered to be both exceptionally gifted and trustworthy. He’s also somewhat naïve and driven by his hormones, two facts that landed him in a serious predicament.

Berdehl met a girl he liked named Apricot at Lo Shang Ridge and offered bare-margin trades with her family to impress them into letting her come with him. After the trades were done, Apricot’s father refused to allow her to leave and Berdehl fumed. When he snuck back into the village to meet Apricot, she offered to sneak away with him; they developed a plan where Berdehl would fake a raid on the village and “kidnap” her. Things went a little awry when an overenthusiastic hawkman started a fire, which proceeded to burn down a pair of empty buildings. Once they were safely away, Apricot admitted that her father had cheated Berdehl, and his slow-burning resentment turned into a vicious storm of anger.

Berdehl intended to enact the hawkriders’ code to the letter: destroy those that have cheated you. He led a raid against the village, which was interrupted by the circle. The Solars managed to convince the rash young Dragon-Blood to leave well enough alone and accept that mistakes were made on both sides. As well, he was able to overcome his hesitation and remain in love with the girl he risked everything for.

After the assault on Silver Springs, the circle followed the hawkriders back to their home, the flying mountain of Metagalapa. There, they discovered that the Hawkrider Council was in negotiation with Infernals, only for most of the council to be slaughtered and the mountain turned into a battleground. Berdehl’s father was in league with the Infernals, and was put to death at the conclusion of the Siege of Metagalapa. Shortly thereafter, Berdehl and Apricot were wed to bring some light to a dark time in the small nation’s life.

Berdehl is slim and handsome, with pale-blue eyes and light brown hair that is beginning to turn storm-grey. He prefers to fight with a bow from the back of his hawk, but when forced into close-range combat he relies on a fine steel spear. 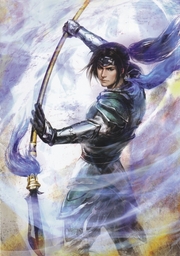