PUT YA GUNS ON
Amilar Sui-Chai holds the rank of Syntagmatarch (captain) in the Lookshy Seventh Legion. She is an experienced sorcerer-engineer and commander of a small cadre of airships. She is also a devout follower of the Immaculate Faith, leaning toward the militant aspect of the religion rather than the more modest and balanced version practiced by most Lookshyans. She has taken serious affront at the attempts by her commanding officer, Teresu Ben-Charjz, to reach out to a circle of “Anathema” for extra-military aid.

It has been theorized that she is partially or wholly responsible for Venomous Spur’s run-in with the Wyld Hunt during the Treaty Council, but this remains unfounded rumor. 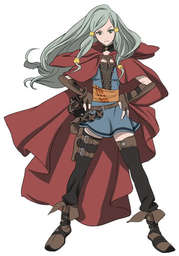