Apricot is a spirit-seer from the village of Lo Shang Ridge. As a mystic hermaprodite—part of the third gender known in the East as ko•—she is a keen observer of gods and men, but she possesses no particular combat ability.

A pretty teenaged “girl” with brown hair and honey-colored eyes, Apricot isn’t the prettiest girl in Lo Shang Ridge, but she’s close. Her father, Mugwort Yoon, is the head of the town’s grain-trading concern. She overheard her father’s plan to overcharge the hawkriders and thought it was awfully unfair, especially considering how cute the riders’ leader was. Apricot inherited some of her father’s guile, and came up with the plan to have Berdehl “kidnap” her and the two of them run off to his amazingly romantic flying mountain home. (Berdehl may have talked up Metagalapa a bit.)

Apricot had another secret too, one that she kept only because she thought that Berdehl knew about it before he took her away and feared his reaction once she realized he didn’t know. Apricot isn’t a girl, precisely—she’s a female-identifying ko•. The ko• are a local phenomenon, not exactly rare in the East but more common in this region: a third gender, with the sexual characteristics of both male and female. Ko• are considered lucky in the Lo Shang region and are publicly referred to by whichever gender they prefer (or by a gender-neutral pronoun if they lack preference). Ko• possess male and female genitalia, though they pass through periods of greater or lesser dominance; Apricot is female-dominant most of the time.

Apricot is clever but as short-sighted as her father. When she couldn’t get her way with charm, she came up with a brilliant plan to fake her own kidnapping, but didn’t consider the long-term consequences. Fortunately, thanks to the intervention of the circle and some motherly advice from Venomous Spur, a tragedy was averted and Apricot was able to return to Metagalapa with Berdehl. Despite many difficulties, the two young people were recently married. 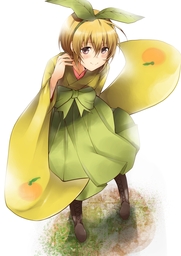