The Machine God, the Slumbering Primordial, the Great Maker

Possessed of world-shattering power, the Primordial called Autochthon, the Great Maker, slumbers fitfully beyond the Seal of Eight Divinities. His power—were he awake to use it—would be vast beyond measure. Yet he still fled from Creation during the years after the Primordial War. What was he so afraid of?

Known to his people as “the Great Maker” or “the Machine God,” Autochthon was a rogue Primordial who turned traitor against his own kind to aid the gods in their war against the makers of Creation. He gave them inside information, knowledge of Primordial strengths and weaknesses, and the greatest weapons ever forged—the Exaltations. It was Autochthon who came up with the idea to imbue mortals with the power to challenge the Primordials, and the one who chose humans above all other mortals as the bearers of the Exaltations.

After the war was over, Autochthon remained in Creation for only a few short centuries, teaching wonders and mysteries to those that would hear his words. His closest associate was the God of Exaltation, Lytek, though he also spent significant time in contact with a low-ranked Twilight Caste sorcerer called Akuma. After the Solar Deliberative exiled Autochthon’s beloved Mountain Folk underground in perpetuity, the Machine God became withdrawn and sullen. Before he could be brought to task for his recalcitrance, he suddenly departed Creation for parts unknown, taking along thousands of his faithful and countless numbers of souls from the tower of Taru-Han. He left behind only another mystery, the so-called Seal of Eight Divinities.

For four millennia, the fate of Autochthon has been unknown. Until now. 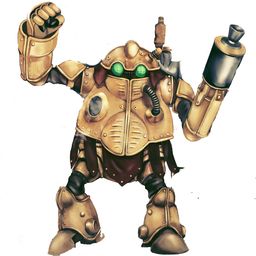