Leader of the Gold Faction, head of the Sidereal Ministry of Journeys

Ayesha Ura is a skilled sorceress, initiated into the Sapphire Circle through the Salinan school. She is also a martial artist of some skill and the leader of the Gold Faction.

Being born in the Dejazmachy in the Southeast, under the rule of the Solar Queen Chiara and her Lunar mate Tamuz, Ayesha Ura was orphaned at just nine months of age after the Dejazmachy was destroyed in the Usurpation. After being orphaned, Ayesha was raised in Heaven, where she was was taught Bronze Faction ideals throughout her childhood. When she Exalted as a Chosen of Journeys she attracted the attention of Chejop Kejak and—despite dreaming of her Gold Faction previous incarnation—soon became his lover.

Once apprenticed to Chejop Kejak and a supporter of the Bronze Faction, Ayesha Ura learned sorcery under his tutelage, gaining power and remembering her life as Tammiz Ushun. Upon her initiation into the Sapphire Circle of sorcery, she sacrificed her admiration and affection for Chejop Kejak and left his side to seek her own path, eventually joining the Gold Faction. 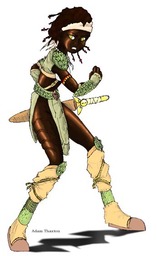