The youngest member of his circle, Blazer remains idealistic and hopeful--but how long can his innocence last in the face of the Age of Sorrows?

A blue-haired pretty boy with the obvious tint of Northern blood to his features. Blazer typically dresses like a wandering scholar or doctor in a high-collared tunic and calf-high boots. He is rarely seen without a Northern winter cloak, though most places he travels these days are somewhat too warm for it to be comfortable.

The boy who would become Blazer Orpheus was born to a society of monk-scholars living in the remains of a First Age library, where he was known as Shinn. The library culture was funded by a retired Water Aspect who had discovered it while on campaign and turned it into a pet project. Mostly staffed by native scholars, young Shinn was given a comprehensive education into both scholastic matters and practical crafting, tempering him into a pacifist with great respect for knowledge and faith alike.

In his teenaged years, one of the elderly scholars of the library became convinced that Shinn had a great destiny ahead of him, perhaps even to Exalt as a Dragon-Blood! The rumor became so common that one of the library-master’s friends, an Air Aspect visiting the library, became interested in possibly taking him away with her when she left. Shinn likely would have lived out a calm, scholastic life (either in the library or as the page to a Dragon-Blood) save for the sudden appearance of an arm of the Bull of the North’s army, far off course and looking for someone to take their aggression out on, and his own subsequent Second Breath.

Recognizing him as Anathema, the Dragon-Blood dueled Shinn but could not defeat him; in turn, Shinn could not bring himself to kill a woman that he now had to admit that he had feelings for. Shinn fled and discovered a sub-basement below the library where he found an imperishable book bound in orichalcum: the Tome of the Great Maker. Escaping through the caverns beneath the library, he finally learned hatred as well—for the army that had destroyed so much knowledge and so many innocent lives out of ignorance and fury. In that moment, he was Shinn no longer—but Blazer Orpheus. Blazer studies the book whenever he can, grasping only the basics of the theory, but enough to allow him to create temporary artifacts by manifesting them through his anima. He can create permanent artifacts the standard way, and knows a good deal about thaumaturgy and the principles of sorcery.

The events of the past year find Blazer in a markedly different place than before he met up with his sworn brothers and sister. He has shown extremely promising aptitude with sorcery, as introduced by his mentor The Walker in Darkness, honed his artifice abilities enough to throw together complex magical devices in mere minutes, dramatically expanded his Library, and discovered a new source of knowledge and insight by opening his Third Eye. However, this progress has not come without cost: at times, Blazer has run into considerable conflict with several of his circle-mates over their methods and beliefs, and has started to find himself questioning whether or not the Solars (and Lunars, for that matter) are truly more of a boon to the world than a bane.

On top of this, he recently discovered that his own immediately previous incarnation—not the Bull of the North—was the mastermind behind the massacre at the Librarium. This has combined to put the young Twilight in a particularly reflective place. Where that will take him is still cloudy and indeterminate, and only time will tell whether the long hours of study and meditation going on in the Library will lead him to reconciliation, or to something far darker. 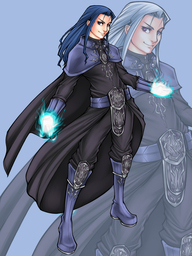