A lost egg adopted into the Realm

Juo Chen is a shikari, armed and trained by the Wyld Hunt to hunt down the vile Anathema. She is a skilled warrior, but primarily focused on military-level tactics and mortal troop coordination. She carried a red jade daiklave, but the extent of her panoply has yet to be revealed.

Juo Chen was born in a small Threshold satrapy of the Realm. When she Exalted at the age of sixteen, there was never any question for her family what would be done. They brought her before the satrap, who formally recognized her as a lost egg and sent her to the Realm. She missed her parents and siblings for a time, but the duties of a Dragon-Blooded swept away the years until none of them remained among the living.

Adopted by the Great House of Cathak, Juo Chen became a magistrate of the Scarlet Empress, carrying her justice across the Blessed Isle. After the disappearance of the Empress five years ago the Imperial services began to disintegrate, starting with the open dismantling of the magistrates. Anxious to not be among the fallen and unable to expect help from her adopted family, Juo Chen swore herself to the Wyld Hunt, using the organization’s ostensible political neutrality to avoid those that would strike against a magistrate.

As a former Imperial magistrate, Juo Chen has dealt with mortals directly far more than most of her shikari-circle. Her specialty is the military training of a mortal populace, and the organization of mortal soldiers into effective units. She is unused to working alongside other Dragon-Bloods for any length of time, making her an anomaly among the Wyld Hunt. She and Peleps Deled have a singular dislike for one another; the Water Aspect’s disdain for mortals runs counter to everything Juo Chen believes in.

With the defeat of her circle at the Second Battle of Mishaka, Juo Chen has begun to believe that the “Anathema” may not be as evil as she had previously thought. She is especially curious about these “Sidereal Exalted” that Setod and Makara seemed to already know about… 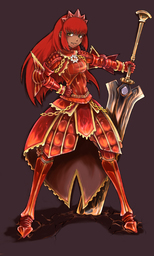