A staid commissar of the Jade Caste

Der Commissar is in Town

Ceaseless Proletarian March is the youngest Alchemical in her assembly, having been decanted after the end of the Elemental War to replace the losses of the Champions who died in that conflict. Due to the few resources available after the destruction of the war, only a few Alchemicals could be built to replace those that were lost. The burden on them to live up to the heroic ideals is enormous.

Among the most successful (and most obscure) is Ceaseless Proletarian March, trained and employed as a commissar—a Populat morale officer. Her primary duty is to assemble and train Populat workers for emergency defense maneuvers, and to tour factories in order to raise working spirit. While she is quite good at her job, privately she wishes for something more important than raising the spirit of working class people. Her assembly commander, Gloriously Cerebrant Ordinator would say that there is nothing more important than aiding the common people—and publicly she would agree—but she longs for some great event to come along that will let her show her worth. 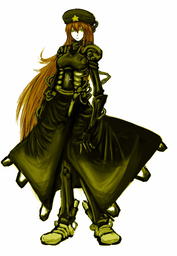