A tempestuous and mercurial, but honorable, Water Aspect martial artist who yearns constantly to hone his warrior's spirit.

Wake is quite possibly the most skilled martial artist in the entire valley of Three Oaks, and easily one of the best ever seen in the region. Though his favored styles are very technical and cerebral in nature, he hasn’t branched out very far beyond his straightforward staff-fighting roots, though he does possess an exceptional talent with water manipulation techniques, even for a Water Aspect.

The boy who would become known as Cerulean Wake lived a fairly unremarkable life until his early teens. With the ever-present threat of the Wyld, the valley always had need of warriors willing to dedicate their lives to protecting it – the boy grew up on stories of Shattered Earth Soldier, the last great Dragon-Blooded hero of the valley, and dreamed of someday following in his footsteps by gloriously defending his fellows from the Fair Folk. Unfortunately for him, he possessed practically no talent for the martial arts, and languished at the rear of every group of trainees. He never stopped honing his body and mind, however – day in, day out, before anyone else had risen for the day, and long after everyone else had turned in for the night, pushing himself to his limits. Eventually, he received the distinguished honor of training under Seven Vaulting Staves, the eccentric and wizened old mortal warrior-monk widely regarded as the greatest guru in many generations. None were as surprised by this as the boy himself – it was literally the first recognition he had ever received, of any kind – but he devoted himself to his regimen with the same vigor with which he lived every aspect of his life, and continued to dream his dreams of valor.

It was during those teenage years when he first met Smoldering Cinder, the young miko who had recently taken over the top position at the main shrine in the valley. She had already Exalted, but despite her lofty post she made fast friends with the awkward boy, and encouraged him to keep up his work. The friendship rapidly grew into affection, which only increased his desire to become something greater, and it wasn’t much longer until his sifu began instructing him in the first tenets of his highest martial art, the one bearing his own name. Though still a constant struggle, the teenager had found what he needed to dig further still into himself, and pressed on. He wasn’t disappointed: one day, after meditating for five days in a row atop a rock on the Mountain of Elders, something in his souls clicked into place, and he became touched by Daana’d the Water Dragon. Finally realizing that the lifelong blocks that had kept him from advancing with his peers had actually been acting as training weights for his spirit, he embraced his newfound power, his new name “Cerulean Wake”, and began taking his first true steps down the path of Seven Vaulting Staves.

Despite the sudden and dramatic shift in his personal abilities, life did not change overly much at first for Cerulean Wake. He joined Cinder as an official Guardian of the valley, but still maintained a fierce training regimen, made all the more so by how boundless his new limits seemed to be. It wasn’t until his first full-on battle against the Fair Folk, where he stood side-by-side with Smoldering Cinder and defeated a duo of Cataphractoi, that he truly showed the valley how far he had come. In the seventy-plus years since, he has fought in no fewer than two hundred battles against the forces of the Wyld, dealing them defeat after defeat, sometimes against vastly overwhelming odds. Despite this long list of successes, he still feels he has a long way to go as a warrior, and maintains a lively rivalry with Cinder, in addition to their relationship. He has grown very close to Soaring Ibis, who became his charge upon her own Exaltation and also snagged his heart quite securely. Also, somewhat surprisingly given his general lack of awareness for the spirit world, he has formed a tight bond with the god of Lake Noamin, the water serpent Jorudo, who acts as a confidant when Wake’s spirit grows particularly restless. 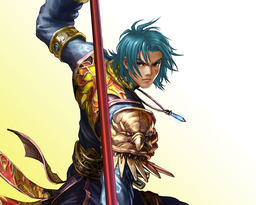