For the love of…

Cho Pang first met the circle as they were departing the small village of Lo Shang Ridge, and informed them of the flood that had ruined neighboring Misty Valley. After leaving the southern stretches of the Lo Mountains behind, Cho Pang’s caravan turned north and made for the waystation at Ocho-Rin Hill, only to find it taken over in a recent slave rebellion. The freedmen emancipated Cho Pang’s slaves, took most of his goods as “back wages,” and told him that the new law of the East would be “no slaves.” Offended and impoverished (the slaves taken were his personal ones, and he had always gone out of his way to be decent to them), the furious Cho Pang decided to skip Delsinar on his journey northward and make for the larger city-state of Yelang instead.

Along the way, the remnants of his caravan were attacked by Ma-Ha-Suchi’s goatmen, who were in the area to scout for a massive future assault; most of his staff were killed, and he and a handful of others were taken prisoner to serve as foodstuffs or breeding stock. Cho Pang’s one piece of recent luck was the intervention of the circle in saving his life from the goatmen. He traveled with them to Yelang, where he accepted the hospitality of Vartabed Duma, if not his preaching.

After a lengthy absence, he turned up back at Ocho-Rin Hill as one of the tentative supporters of Mistress Shun and Commander Tranh’s attempt to retake the city. When he saw what became of the Iron Brotherhood’s leadership at Snapdragon’s hands, he reconsidered and chose to stay out of the fight. At the battle’s conclusion, he was convinced by his personal assistant Woodmouse that the Guild’s future was too precarious to stay with them. As of his most recent appearance, he has chosen to throw in his lot with the freemen of Ochorin.

Cho Pang is convinced that the gods have singled him out for karmic amusement. He may not be wrong. 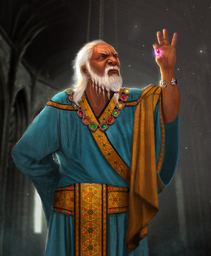