Shield of a Different Day

When her city was devastated during the Great Contagion, Shield of a Different Day gathered up the survivors and led them away from plague and war. Those survivors wandered in the wilderness for years until coming upon a green, healthy land far from the horrors of war. Unfortunately, two other tribes had also found the place, and it had an unpleasant neighbor—the shadowland domain of Princess Magnificent.

Rather than fight among themselves, the three gods of the meeting tribes chose to form a union and merge their peoples into a single nation. The other two gods, Talespinner and Dreamweaver, proposed a mystic ritual to drive away the Deathlord, while Dayshield organized the people into a unified front. The three gods won their battle and founded the city of Great Forks, which they rule together to this very day.

Shield of a Different Day 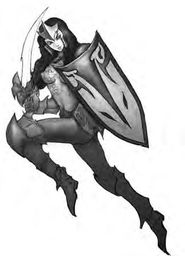