Weaver of Dreams of Victory

The most mysterious of the triad gods of Great Forks, Weaver of Dreams of Victory first appeared in the minds of dreamers from several refugee tribes in the wake of the Great Contagion. Those that followed her midnight urgings found one another safely and eventually came to be united as a single tribe in her worship. When they arrived at their chosen land only to find two other tribes ready to come to blows over it, Dreamweaver’s people led the call for peace.

In time, Dreamweaver became part of a trinity of deities for all of the tribes of Great Forks, along with Dayshield and Talespinner. Together, they drove away Princess Magnificent with Lips of Coral and Robes of Black Feathers, and created a mighty nation.

Weaver of Dreams of Victory 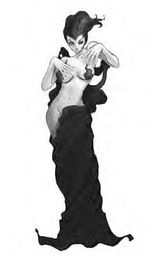