That Which Calls to the Shadow, flute-playing herald of the Ebon Dragon

In the First Age, the wisest cities constructed enchanted lighthouses, even if they lay far from the sea, and armed these minarets with piercing klaxons. Sadly, most of these structures have been destroyed by war or neglect, and scarcely anyone remembers that their alarms could drown out the horn of Erembour while their golden heliographic beams scoured the streets to halt her passage.

When the Shadow of All Things brings darkness upon a region of Malfeas, things emerge that frighten even other demons. Though many flee the streets, the lady Erembour passes in the wake of the Ebon Dragon and plays a doleful song with her silver horn. Her performance fills the hearts of those who hear it with melancholy and an enduring appreciation of the darkness. Some who hear its sound revel in the passing of the Ebon Dragon, while others resist. Some are drawn to Erembour and die, while others become shadowy monsters no longer able to bear the light. Those who answer the horn of That Which Calls to the Shadows lurk in the fringes of the Ebon Dragon or in dark places that the light of the green sun cannot pierce.

Erembour wears silken robes of silver and has flawless skin of deepest black. Her liquid eyes shimmer like the moon, and strands of glowing white hair twinkle amid her raven tresses. She carries a long silver horn curved like a mighty ram’s, and a naked rat’s tail sometimes peeks from the back of her robes. Torches and other ephemeral lights are instantly extinguished by her presence. 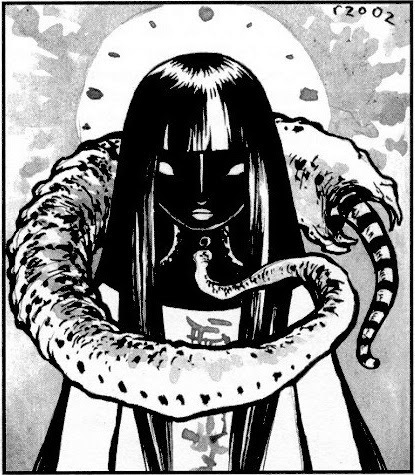