A Lunar with a vicious temper and a bad reputation

Fenrir is a ferocious-looking Northern man with white hair and pale, scarred skin. He wears the remnants of his many kills as fur and leather in his clothes, and he is never without his moonsilver short daiklave, Winter’s Tooth.

What little is known of the Lunar warrior named Fenrir comes from Venomous Spur and her interactions with the Silver Pact. Fenrir is a Full Moon Caste hunter, noted for his membership with the Swords of Gaia and having slain a behemoth single-handedly. His totem is the arctic wolf, and he bears a moonsilver daiklave called Winter’s Tooth. Supposedly, he was once in a pack with Luminous Vesper, but the two of them had some sort of falling-out a decade or so ago.

Fenrir was in the city of Zarrith with his Solar mate, Invincible Sword Princess. The two of them don’t seem to like each other very much, so it remains to be seen why they remain together. Fenrir was hunting the Tyrant of Brass and Emerald Fire, but chose to lead to to Zarrith in retaliation for the circle disrupting the plans of Sweet Emerald’s circle.

During the Grand Moot Arc, Fenrir incurred a minor debt to Venomous Spur for allowing Invincible Sword Princess’ circle access to the moot. Since Ven has been expelled from the Silver Pact, it remains to be seen whether he will still acknowledge that debt. 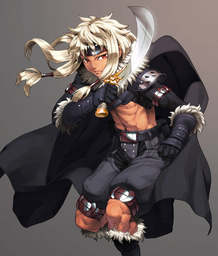