Fiori grew up in Mishaka in the aftermath of the Thorns War, watching his beloved homeland tear itself apart after the departure of the liberation forces. With the death of the monarchy at the hands of the Realm’s occupying forces, Mishaka was left leaderless. After years of civil strife, the city was taken over by a council of wealthy citizens who promised that their rule would be temporary. A decade later, Fiori came to realize that the oligarchs would never leave power voluntarily, and began to rally the people against them.

While direct rebellion would see him imprisoned, Mishakan tradition permitted the public airing of ideas and grievances, so long as no individuals were directly condemned. Fiori became a famed public speaker, sharing his ideas about fair governance in the streets and having his philosophical arguments printed by publishers for widespread dissemination. Fiori refused to enrich himself through his fame, instead wandering among the common folk and spreading his message of change. When the Guild brought their slavery to Mishaka, Fiori made it his life’s mission to eradicate the practice. Though he’s suffered personal attacks from his preaching, he is staunchly nonviolent.

Fiori is popular in Mishaka, at least among the lower class. He is charismatic, honest, and opinionated—a sure-fire mix to get him killed. Prism of Truth has foreseen his murder, and the subsequent disasters that would claim the lives of thousands more, spurring the circle to offer him their protection.

During the debate against Lady Campanelle for the future of Mishaka, Fiori was given the floor by the circle. At the height of his dramatic argument, he was filled with the power of the Unconquered Sun, blessing him as a member of the Eclipse Caste. After disbanding the Council of Oligarchs, Fiori has built up a new citizen’s council and seeks to form an alliance with the city of Delsinar.

His current stance is one of strong defense for Mishaka, but he seeks to build up the entire region in the long term. Fiori is philosophically opposed to slavery, but now understands that the East’s economy would collapse without it. He is heavily invested in seeking alternatives.

During the Confederation Conference at Marita, Fiori was at the forefront of an initiative to unite the nations of Mishaka, Delsinar, and Ochorin under a single banner. Red Lion proposed inviting Yelang into the new power bloc as well, but no movement has yet been made on the matter. Fiori seems to have taken a personal interest in the well-being of King Voshun, acting as a mentor and adoptive uncle to the young monarch.

Though he has learned martial arts through his personal enlightenment, Fiori prefers to solve his problems through debate and reason instead of violence. This policy found him poorly matched against the violent prowess of Havesh the Vanisher, who beat Fiori almost to death during the kidnapping of Voshun. 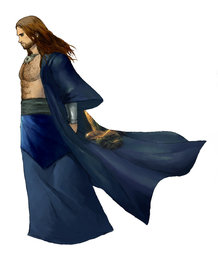