The god of Calibration, rejected by the Incarnae and the calendar gods

Five Days Darkness is a celestial god, with all of the authority and power that position implies. Additionally, he is reputed to be a powerful martial artist, and one of the finest warriors of Heaven. As the shadow of the Unconquered Sun, he is also a creature of darkness, though he does not actually seem to be evil. He is unable to manifest in sunlight, so he can only appear for the twelve hours of the night. He also tends to avoid visiting Yu-Shan, as the sky matches the aspect of the current leader in the Games of Divinity, creating the strong chance that he could be dematerialized without warning.

When the Primordials created the Unconquered Sun, the basic laws of the universe dictated that for every light, a shadow must be cast. For the pure and perfect light of the Unconquered Sun, that shadow was a nameless divine entity. Unable to bear his maker’s light, the nameless god fled his presence and sought refuge with Luna and the Five Maidens. None of them were able to help him find purpose, though they were kind and respectful in doing so. Not so were the calendar gods—they mocked the nameless god and drove him from their presence with their combined might.

Fuming with rage, the nameless god became the keeper of the “unlucky” period of Calibration—the five days each year that are not part of the calendar, and during which the moon and stars do not shine. Calling himself “Five Days Darkness,” the god thought to avenge himself on Creation for his humiliation but quickly realized that was a stupid fucking idea. Creation hadn’t wronged him at all—the calendar gods had.

Now, Five Days Darkness lives most of his nights in Creation, following his own pursuits and looking for ways to get back at the calendar spirits in whatever way he can. In the meantime, he spars with any comers, wanders Creation, and keeps himself entertained. As a celestial god with a self-ordained purpose, he doesn’t really have a lot of responsibilities. 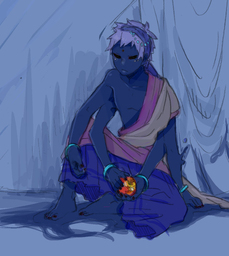