The Alchemical known as Fractal Sorrows Calculator is the most powerful member of assembly, as well as the oldest. Predating the decanting of the second-oldest Alchemical in her assembly by over a century, she is one of the most experienced Alchemicals remaining in active service to Yugash. However, this leaves her dangerously unbalanced at times, dancing on the precipice of the mental condition known to the Populat as “Clarity.”

During the Elemental War, she was responsible for over three thousand mortal casualties in a single engagement, and the complete destruction of the Starmetal Caste hero called Excellent Anbaric Adjudicator. Despite her designation as a person of mass destruction and the countless lives she has taken, Fractal Sorrows Calculator has an artistic bent; she spends most of her free time writing Yugashi verse-rhythms and designing variations on common Autochthonian musical instruments. 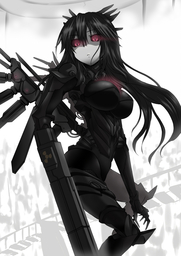