The Dragon-Blooded savior of the Traitorspawn

Tomazri is a young Dragon-Blooded, barely in control of his powers. He has a strong bloodline, as shown by his blue-green hair and gill slits, and can breathe water for short periods of time as well as withstanding the pressure and temperature of the deep Western Ocean.

Born in the undersea city of Luthe, Tomazri is the eldest son of the Gavrane clan leader. He was segregated from his parents at puberty and held until it was unlikely that he would Exalt from his family’s Terrestrial lineage. Thanks to a corrupt trustee who betrayed her own parents to hide Tomazri’s Exaltation from the scionborn, he escaped notice when he bloomed into a Water Aspect. Tomazri spent several months planning his escape from Luthe, but still barely survived the depths and pressure.

When he arrived on the surface, Tomazri was set upon by a group of pirates who mistook him for a Wyld mutant due to his extreme Aspect markings. He was saved from certain death by Gideon Caldaret, on whom he developed a serious crush. Tomazri led Gideon’s circle to sunken Luthe, where they overturned the existing oppressive government and put in place a new representative government and raised the city from the sea floor.

Tomazri has accepted a position as the traitorspawn’s representative on the city council, as well as claiming the moonsilver trident of Leviathan, Islebreaker, for his own. 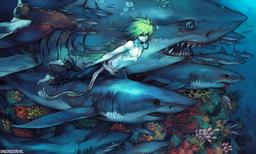