A nemissary in service to the Walker in Darkness

General Zang was a mortal soldier during the time of the Dragon-Blooded Shogunate. After a lifetime of dutiful service to his Dragon-Blooded daimyo, elevating him to a rank held by few mortals, he was assassinated over a political matter and died with hate in his heart. His ambition and fury chained him to the mortal world, trapping him in the Underworld rather than sending him on to his next incarnation. Over the centuries since, he has become a servant of the deathlord called Walker in Darkness, regaining his mortal rank among the dead.

Currently, Zang is the commander of the Walker’s Realm equivalent of a self-defense force. He lives in the city of Saltarello, acting as White Bone Sinner’s aide-de-camp and personal advisor. The two of them are engaged in an under the table deal in which Sinner is given free reign in Saltarello for his personal pursuits, many of which would not be approved of by his master, in exchange for handing over “curiosities” Sinner finds in the mortal world.

General Zang has shown a personal interest in Red Lion, though it remains to be seen how far that goes. 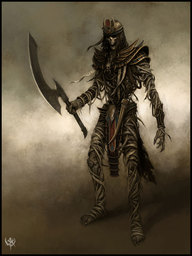