A wandering lawman from a lawless city, Gideon's twin guns bring justice wherever he walks.

Gideon is a shaggy-haired Eastern man with the look of a burnt-out veteran. He is perpetually unshaven and has dark circles under his eyes from lack of rest. His clothing is a much-patched and somewhat modified magistrate’s uniform, topped with a rough straw cloak and coolie hat. His golden pistols, the Twin Dragons, are never far from his hip.

Gideon Caldaret once had the misfortune of being one of the few honest magistrates in the city of Nexus, a man notorious among his peers for his incorruptibility and devotion to the common people. The Council of Entities considered having him “removed” more than once for being a gadfly more interested in justice than profit, but found that having an honest man in his position was sometimes useful. The only corruption of his duties which Gideon engaged in was the occasional passing of information to a mysterious vigilante who could get to criminals no magistrate would touch—a vigilante known only by her calling card, a single snapdragon blossom left with the bodies of her targets.

After the vigilante’s departure in the wake of an unconscionable slaughter, Gideon turned all of his vitriol against the Council and his own department, agitating for reform. The Council finally had enough of him and removed its protections from him. Gideon was taken off the street by the “soldiers” of the crime boss called the Grey Kraken. They tortured him for hours before they were ready to kill him—when he suddenly burst free of his bonds and began to burn with the power of the Unconquered Sun.

Gideon slew the corrupt men surrounding him, followed the last traces of his past life’s memories to an underground tomb that held his twin plasma tongue repeaters, and fled Nexus to fund his place in the world. Now, he walks the earth, sometimes working with Snapdragon and sometimes alone, seeking to understand the power that has been given to him and use it to bring justice to the world.

In recent months, Gideon has refined his talents with the Twin Dragons into a variant of the martial art known as Righteous Devil Style. 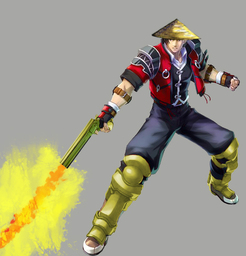