Even before Exalting, Hachi was a powerful martial artist trained by the Sacred Order of the Tiger. His passion for justice and compassion to the poor made him beloved by the common people of the Hundred Kingdoms, but hated by many competing martial artists and bandits. As a Solar Exalted, Hachi’s strength, speed, and stamina have been boosted to superhuman levels, and the secrets of Celestial Martial Arts are beginning to open up before him.

Unlike most beastmen, who are reviled and hated for their mutations, Hachi was raised in a life of comfort and plenty by the monks of the Sacred Order of the Tiger, who believed him to be their spiritual guide. Hachi took the lessons of the Order to heart, becoming a champion of justice and righteousness in the East. He met many evil men in his travels as well, defeating many of them with his martial arts prowess and turning others to the cause of good.

One such ally was the young smuggler Hanzu, who eventually joined the Order under the name Thousand-Year Peregrine. The two of them were the only survivors when the Order was destroyed by the soldiers of Emperor Diarmid, leading them to join the rebellion led by Princess Ariel Nemani. After the rebellion was defeated and Peregrine presumed killed, Hachi threw himself into a bottle and stayed there for most of a season.

Finally pulling himself together with the aid of an itinerant performer, Hachi saved his best friend, rebuilt the rebellion, and led an army against Diarmid. The heroes of Balidar reunited to destroy Black Heart of Midnight and his airship, finally placing Ariel Nemani on the Crystal Throne of Balidar.

Hachi has only just come into his own as a member of the Dawn Caste and a new circle guarding Balidar, but he is adapting to his new condition more quickly than any of his companions. Hachi has no religious opposition to his new state (like Ariel or Quel), nor any reason to be wary of others of his own kind (like Peregrine), so he is advancing in power rapidly. 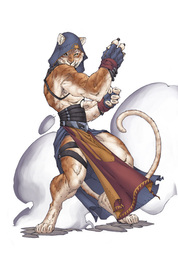