Physically, Havesh looks more like a Dawn Caste than a Night Caste. He stands as tall and as broad as Red Lion, keeping his hair in a neat crew cut. Havesh carries a heavy chopping sword and uses water dragon claws in close combat, as well as carrying a brace of throwing knives.

Havesh’s most potent ability is his power to assume the face of anyone he chooses, infiltrating seamlessly into his target’s life. He used this ability to steal Snapdragon’s identity and kidnap King Voshun, nearly killing Fiori in the process. He can also apparently vaporize dead bodies or send them to Elsewhere, erasing the physical traces of his murders, as well as “whitewashing” the essence patterns of his actions, making them nearly impossible to discern through charms.

Despite his preference for stealth, Havesh is no pushover in direct confrontations. He is nearly as strong and tough as Red Lion, as well as being significantly faster, and is a skilled student of Solar Hero Style martial arts. He is proficient with multiple weapons and is capable of snapping a mortal’s neck with a casual gesture. His greatest combat strength is his total ruthlessness—no tactic is too low for Havesh to consider. Havesh at a young age.

If any Exalted has earned the title of “Anathema,” it’s Havesh.

Notorious throughout the East as a master assassin capable of reaching virtually any target, Havesh’s nickname comes from his habit of “vanishing” them. Those Havesh slays are simply never seen again. His supposed victims include men, women, and children, high-ranking and low-born. No one is too good for Havesh to kill—he cares only about money. Havesh is a merciless killer and a ruthless opponent with no respect for life.

And, since joining up with Red Lion and gang: 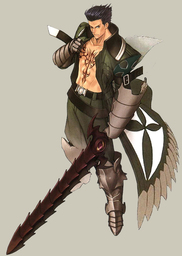