Celestial god of decay and rot

Celestial God
God of rot and decay
The Raven King

Hran-Tzu is one of the most powerful and influential gods in Yu-Shan, though he wields his might only occasionally. He is the god of decay, one of the more important multi-disciplinary offices in the Celestial Bureaucracy. He has three different supervisors, all of whom generally defer to his expertise in matters concerning his purview, as well as sitting on nearly a dozen special committee boards. All of this power and influence belies one simple fact: no one trusts him.

The Raven King has been looked at with suspicion ever since the Great Contagion, a time when his power surged manifold because of the vast amounts of death throughout Creation. The appearance of the deathlords and their minions has only renewed the scrutiny placed upon him by his peers. The only thing that keeps them from simply censuring him or removing him from office is the same power, both political and personal, that makes them so wary of him. So instead, he is merely watched almost constantly.

In addition to his many official responsibilities, Hran-Tzu is an avid gardener and collector of oddities. He is currently the acting god of murder, due to a bureaucratic shuffle after the removal of the previous office-holder, but he has shown little interest in making his hold on that title permanent. 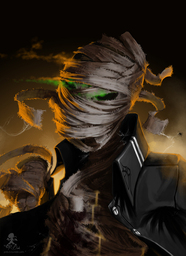