Inquisitor Kelani is blind, but still a formidable warrior. She bears the taint of the Void, allowing her body to endure far more trauma than even a normal heroic mortal, and she has replaced swaths of her body with Voidtech devices.

Preceptor Kelani was a Yugashi priestess involved in hunting a Voidbringer cult. She was corrupted by the seductive words of the heretic Alchemical now known as Perpetual Entropy Engine. The terrible revelations caused her to tear out her own eyes, replacing them with Voidtech reflectors. She used her security clearance to lead a major gremlin incursion that cost many innocent people their lives, culminating in her murdering her own father, Morkush, the High Celebrant of Yugash.

After the incursion was repelled, Kelani followed her lover back to the Far Reaches, where the two of them have plotted the destruction of Yugash. Kelani keeps her father’s severed head in an adamant jar, wired with Voidtech to keep his brain semi-conscious. The head of Morkush can provide oracular insight, as well as warning beyond the realm of the common senses. 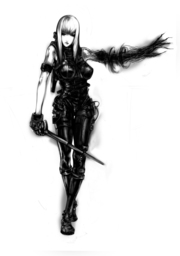