Itzcalimon is the city father of Zarrith. He tends to manifest as a man with jaguar facial features and spotted hide. Though a warrior god, Itzcalimon’s faith chose to remain neutral in the three-way civil war that dominated Zarrith for two mortal generations. Because of this, his priesthood became a home for people seeking to avoid war and danger, leading to a dilution of Itzcalimon’s warrior ideals. Since the intervention of two Solar circles in his city, Itzcalimon has been vaulted back into prominence. 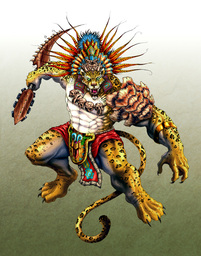