YUKIMURA! MASAMUNE!
Karal Kenporo holds the modest rank of Syntagmatarch (captain) in the Lookshy Seventh Legion—modest because his illustrious family name and age should have seen him promoted above his current rank several times. He has languished as a supply chain commander for several decades due to his general competence at his job and a crucial weakness as a military commander: he is too cautious. While Kenporo’s general conservatism makes him an excellent supply chief, it keeps him beneath the notice of both his ambitious family and his tactically-minded superiors.

Until a decade ago, Teresu Ben-Charjz served as a supply officer under Kenporo, until he was scouted by the diplomatic corps. Now, the younger officer holds a higher office than Kenporo, a fact that rankles his conservative sensibilities. Kenporo continues to do his duty, but if he sees a possibility to one-up his former junior, he’s likely to take it. 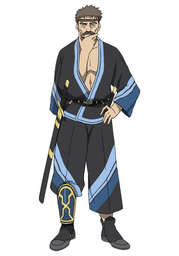