A former war-leader of the Arczeckhi Horde, now a lab rat

The war-leader known as Kervassi had powerful claws and a mighty bite, though now he must stoop to using manufactured weapons. He has moderate skill as a warrior, and is in constant training to regain the skill he lost after being “purified” by Venomous Spur.

Little is known about Kervassi from before his run-in with the circle at the head of an Arczeckh raiding party. As the only survivor of his band from that encounter, he was spared to allow Venomous Spur a test subject for her Wyld suppression device, the octo-gun. Since then, Kervassi has shown increasing levels of control and intelligence, traits not normally associated with the brutally violent Arczeckhi. Only time will tell if Ven’s “cure” has truly removed the Wyld influence from him, or if it has just put it off temporarily. 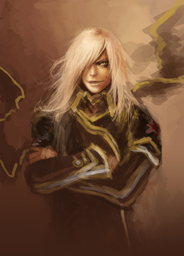