As a member of the Starmetal Caste, Lissome Avid Engineer is able to perform lightning-fast mental calculations on a variety of subjects. She is an adept user of Autochthonian protocols (what the Creation-born might term “sorcery”) as well as what her name suggests—an excellent engineer of wonders. Lissome Avid Engineer carries a starmetal beamklave for personal defense, though physical combat is not her forte.

Only twenty years old, Lissome Avid Engineer is still the second-oldest Alchemical in her assembly, having been decanted before the horrors of the Elemental War. She was originally designed as a high-level celebrity personality, but the decanting process also infused within her a ceaseless passion for building and construction. Within a few short years, Lissome Avid Engineer was known as the finest architect in Yugash, directing the growth patterns of Champions centuries her senior and designing municipal charms beyond her tender age.

The Elemental War was a time of horror for Lissome Avid Engineer. She was never sent to the front ranks, as she was considered too valuable on the home front, where she acted as a propaganda icon. Lissome Avid Engineer was the star of dozens of lithographic transmissions, her image plastered on posters and light projections throughout Yugash. She was always disturbed by the use her image was put to, though she considered it a great honor to serve her nation in any way possible. After the war ended, she suffered a brief crisis of faith, one that ended with the beginning of her relationship with a Prolific Scholar named Kasta.

Lissome Avid Engineer remains prominent in the public eye, by far the most famous of her assembly. She is close friends with several propaganda ministers in the Olgotary and Theomachracy; her only real regret is how much time it takes away from Kasta.

Having been cast into Creation at the conclusion of the Razor Incident, Engineer and Kasta found themselves flung into the Far North. Barely surviving the lethal weather due to _Engineer_’s building skills, the two of them found their way to Gethamane, where they have settled comfortably despite the looming threat of the Bull of the North. Though now reunited with her assembly-mates, she privately wonders if they should return to Autochthonia at all. 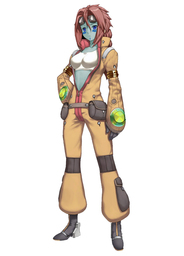