Luka Prime (sometimes referred to by Venomous Spur as “Merenghi”) is a humanoid version of the Tako Luka genesis-creations developed as healers. The humanoid Luka can still produce the “healing slime” of her smaller non-humanoid cousins, but unlike them she is truly self-aware. She looks like a normal Tako Luka from the neck up, though her face is a fully-formed human face instead of a vague replica of one, but from the neck down she seems entirely human. Her most unnerving ability is the power to detach her head and have both her head and body act independently.

Venomous Spur refers to herself and Red Lion as Luka’s “parents,” but it’s unknown how true this is. 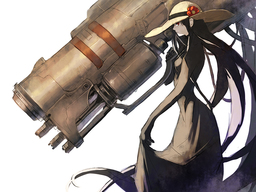