Lyta is an expert martial artist, having mastered Tiger Style, and is an archer without peer. Her total focus on mastery of the warlike arts has left little room in her mind for less violent pursuits, and she tends to respond to any challenge with lethal force.

Lyta was born in the Realm, the daughter of a noble Dragon-Blooded house. After she reached the age of twenty without Exalting, her disappointed parents sent her to a monastery where she could bring some honor to the family. Within a year, she had reached the limits of mortal martial arts mastery, and her arrogant strength drew the attention of a Dragon-Blooded monk who sought to humble her before killing her. At the peak of their duel, Lyta Exalted and slew every monk in her temple.

Without the timely intervention of a Sidereal calling himself Crane, Lyta never would have gotten off the Blessed Isle. As it was, she and Crane barely escaped with their lives, fleeing to the Northern Threshold where Lyta overthrew a Realm-affiliated kingdom and once again drew the attention of the Wyld Hunt. Leaving the kingdom in flames, Lyta once again fled, this time to the distant West where she could begin rebuilding in earnest.

Lyta has styled herself the queen of Thassa, a small island near Wavecrest speckled with First Age ruins. With a stern hand, Lyta has turned the populace to the worship of the Unconquered Sun and begun building monuments to her own glory. After the arrival of the circle on Thassa, her disagreements with them escalated into outright combat between Lyta and Blazer Orpheus. She nearly killed the Twilight Caste before having her own Omega-Class Essence Cannon turned against her by Venomous Spur, and Blazer broke her legs and left her to die in the collapse of her manse. He currently feels… conflicted about his role in her death. 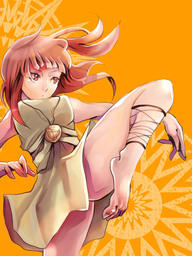