Martinet of the shogunate bureaucracy and the Immaculate Faith

Life it goes on
Maheka Gindira is the youngest and most ambitious officer on the general staff at the Maheka expeditionary command. Though she holds the rank of Syntagmatarch (captain), she is clearly gunning for a promotion through her aggressive politicking and military proposals. As a scion of the major Gens Maheka, Gindira has centuries of tradition and belief to draw upon for her positions. She is an opportunist when it comes to promotion chances, but holds strong to the ancient ways of the Shogunate and the Immaculate Faith. Though not as militant with her religious views as her fellow commander, Amilar Sui-Chai, the two women have bonded over their common spiritual beliefs.

Gindira opposes Ben-Charjz’s choice to use the Anathema to remedy the Puyo situation, but she views it as a chance to advance her own agenda if his plans fail. 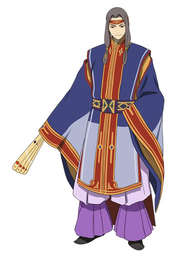