May Blossom is known to be a novice sorcerer and novice martial artist, but her affinity for combining the two into a single discipline is unique among the Five-Fold Fellowship. Even so, she is a low-tier combatant and prefers to avoid physical fights whenever possible.

May Blossom was born to patricians of House Nellens, but she had many opportunities to spy on her Exalted aunts, uncles and cousins. She thus concluded that her Exalted kin were not the morally perfect paragons that her parents and Immaculate tutors claimed. In fact, their debauches would get any common folk hanged, or at least disgraced. May Blossom Exalted as she was about to perform a satirical song on this topic at a family recital, when the sunlight reflecting off a green lacquer box told her this was a really bad idea.

When the Bureau of Destiny came to collect her, though, May Blossom left a complete record of what she knew… and paid a servant to leave it at the time and place she foresaw it would cause the greatest uproar among her Exalted relatives. She joined the Gold Faction, of course.

As one of Heaven’s secret agents, May Blossom finds her early instruction within a Dynastic household almost as useful as her training from the Bureau of Destiny. She can pass as a highborn lady anywhere in the Realm or the Scavenger Lands. The Oracle specializes in seducing her way into the salons (if not necessarily the beds) of the upper classes and discovering their secret intentions or hidden connections to creatures beyond fate. She often leaves her targeted group in an uproar as hidden scandals come to light.

May Blossom looks like an idealized princess: slim but beautifully rounded in all the right places, with elegantly coiffed black hair. Her assured but not haughty manner has men instinctively calling her “ma’am” and offering to help her. She generally wears embroidered gowns of translucent silk, long gloves, golden armbands and a spectacular jeweled headdress. 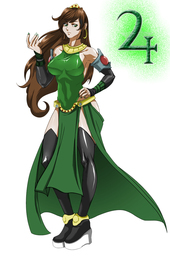