Unimaginably ancient, Mother Bog is the name used by a powerful genius loci behemoth who takes the form of a vast, mobile swamp. Though the swamp does not move very quickly, it can engulf small villages in a matter of days. The entity itself seems largely unconcerned with human life or the destruction it wreaks, regarding humans as simply another kind of raw materials to be used in crafting its servants.

Mother Bog drifts through the East at her own pace, using her Daughters and Sons to drive away those who would interfere with her movements. She has little interest in the people whose homes she destroys, except as potential raw materials for increasing her army of servitors. The creatures she uses as eyes and hands are not true undead, but instead corpses preserved by peat and animated by living plants.

Mother Bog made the mistake of rolling over a village called Sandy Grove. This was a mistake because the circle took her predations personally and proceeded to anchor her with a First Age relic repurposed to seal her corporeally and bind her servitors to her much-diminished borders. They don’t know how to kill her yet, but it’s possible that Mother Bog’s future may be very short. 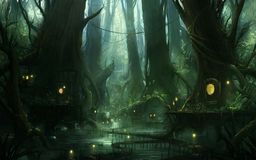