Myler is an ata-beast, one of the human-intelligence animals of Halta. He possesses all of the natural powers of a treepard, including heightened senses, sharp claws, and superior climbing ability, as well as the same intellectual abilities as a human. The major thing he lacks, like all ata-beasts, is a pair of thumbs.

Myler is a government-assigned tour guide (or “tout”) for the city of Chanta in Halta. He’s friendly, gregarious, and outgoing—the opposite of most Haltans, who are generally somewhat nervous around foreigners. Among the locals, it’s an open secret that he’s actually a spy for the Queen’s Cabinet, keeping an eye on outsiders and making sure they don’t cause too much trouble while in-country. 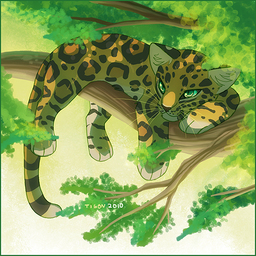