Obsessed with saving Blazer's soul by ending his life.

The warrior-sage called Nagi Mystina was visiting the Saeculo Antiquis Librarium long before the scholar named Shinn was born. Wandering the North questing after lost knowledge, the outcaste Nagi Mystina made her own way in the world and had gained a reputation for both her scholastic skills and her martial prowess. When the Librarium’s master started mentioning the young Shinn to her as a possible candidate for Exaltation, something in her heart said that it was true—that Shinn had a great destiny.

About a year ago, the Librarium was attacked by raiders in league with the Bull of the North. Among its ruins, she found Shinn still alive—after a manner of speaking. The young scholar’s soul had been lost in the struggle, his spirit devoured and his skin worn by one of the Anathema. Now calling itself Blazer Orpheus, the creature attempted to seduce her with its words but she was able to hold strong to her Immaculate beliefs and engage the creature in battle. Knowing that the Anathema were at their most vulnerable right after their creation, she thought she had a decent chance to kill it quickly. Unfortunately, the battle turned against her as she underestimated the demon’s power.

Rather than kill her right away, the demon chose to leave her alive to taunt her with her failure. Now, she hunts across Creation for the demon with her beautiful scholar’s face. She could report him to the Wyld Hunt for help, but they would be just as likely to go off without her as to bring her along—and the demon must die by her hand alone. 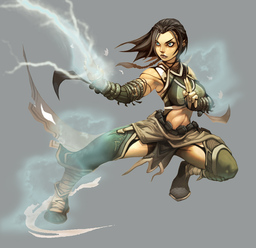