O-Ya-Karas is a blue-furred wolf-man with a curling pair of ram’s horns growing from his head. Despite his status as a beastman, he has a noble bearing that is almost attractive even to humans. His white hair is long and untamed, and his grey eyes hold a lifetime of sorrow and pain.

Ma-Ha-Suchi has had many sons and daughters in his long, twisted life, but O-Ya-Karas has survived longer than any of them, earning him the title “eldest son.” Part of it is his heritage; being god-blooded helps one’s survival chances in a society based on survival of the strongest. More of it can be credited to a trait he possesses that his illustrious father has long since forgotten: the ability to think through problems before trying to smash them.

O-Ya-Karas proved a useful, if short term, ally for Venomous Spur’s Solar allies when they attempted to negotiate with his father. That encounter led to Ma-Ha-Suchi being sent flying into the low cloud layer while Karas was able to successfully extract a favor from the group in exchange for his help. 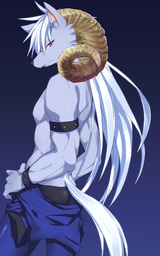