Little is known about Obsidian Hawk, other than his likely embellished tales of his Exaltation, and his suicidal crush on Snapdragon. He carries a prayer-piece he calls the Temple of the First Principle of Motion, as well as wearing artifact sunglasses that allow him to see concealed enemies. He has demonstrated the ability to make bullets curve around obstacles as well. He currently works with the circle led by Sweet Emerald and departed Zarrith with them after their defeat. 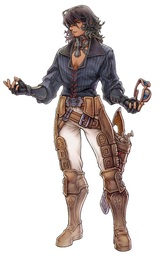