A chill, laid-back Dragon-Blood living and working in Malfeas

Ocean Gemstone Hero went by a different name two centuries ago when he was a faithful citizen of the Realm, but he eventually grew dissatisfied with a life of dissolute nobility. Admittedly, he was more unhappy with the “nobility” part than the “dissolute” part, but his general displeasure with his life caused him to abandon his ties and move West, where he settled into a life in the Neck satrapies as a minor diplomat.

In time, even the minor responsibilities of managing a peaceful satrapy proved too much for him, and to both escape the Realm and combat his lifelong boredom, Ocean Gemstone Hero embarked on an adventure that eventually took him to Malfeas. Unlike most of the poor souls who wind up in that benighted realm, Ocean wound up using his cunning and thrift to great advantage by acting as a go-between for the inhabitants of the demon realm and Creation. He imports goods that the demons cannot make themselves, luxuries like mortal food and drink, and is paid in good will, favors, and the occasional pinch of currency.

Ocean Gemstone Hero lives in a moving house, within which the air is clean and sweet. While Malfeas is a dangerous and occasionally horrific place, Ocean seems to have found the one thing in it that most of its inhabitants never know, and which he could not find in Creation: peace.

Stranger in the Alps 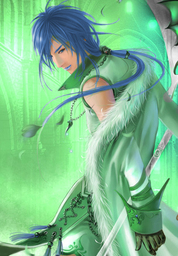