River god of Misty Valley, patron of the Oleander River

Okoto is known to have the ability to control water, though whether that is any water or just the water of his native river is unknown. He can influence the Oleander River with his emotional state, even unwittingly, with this power. He can use this control to push massive amounts of water and fill a man’s lungs with water, drowning him. Okoto bears a massive black jade trident, Glimmer, and is served by a race of water elementals called the koi-koi, who look like women made of water with koi fish heads instead of human heads. He is also served by a river dragon called Swift-Flowing Chundereth.

Okoto is the chief river god of the Lo Mountains region, a fairly minor position in the Terrestrial Bureaucracy, but one that once held some amount of respect. After the Contagion, most of his servitor gods abandoned their posts to find more pleasant and valuable positions, but Okoto remained behind to do his duty. In the end, he was left alone in the mountains with no companionship except a single river dragon and his koi-koi, who are barely intelligent at all.

In his loneliness, Okoto violated the regulations of his position and started sending dream-visions to the people of the nearby villages. With their own livelihoods destroyed, they migrated to the tidal pools below his waterfall and formed the village of Misty Valley. Centuries passed, with Okoto as the guiding spirit of Misty Valley. Okoto asked only one thing in return for his protection; each year, the village would pick several of its young girls in a secret rite to send up the mountain to stay with Okoto for a day and a night. During this time, the girls would sing for Okoto to ease his loneliness.

Finally, one year, the day passed without the girls coming. Okoto wept and raged at finally being forsaken by those he loved, causing the river to swell its banks and drown much of the village. The truth was that the villagers hadn’t forgotten him—they had just been having problems of their own. Most of Misty Valley’s adults had been lost to a conscription the year before, while its remaining women and children had been stolen by slavers. Thanks to the circle, the enslaved villagers were returned to their homes and Okoto was given a new pact with his people. 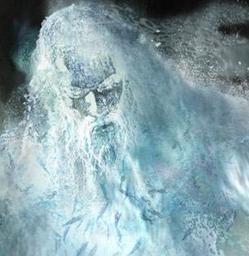