Deled is a master of the Water Dragon Style, an elite warrior with the harpoon and the dragon claws, and quite capable of drowning an entire island with his mastery of the waves. He hates Solars with a passion, considering them an affront to the perfection of the Dragon-Blooded.

Peleps Deled is a shikari, one of the elite hunters of the Wyld Hunt. He has devoted his life to the destruction of the Anathema, and has slain numerous young Solars in his life. Deled is considered an extremist even by other members of the Immaculate Faith, and was nearly cast out of the Immaculate Order as a young monk for killing a classmate in a demonstration match. He remained in the Order through the intervention of his politically connected family, but was placed on permanent sojourn, a state that suits the foul-tempered Dragon-Blood quite well.

Deled has been a shikari for almost three decades, living entirely out of Wyld Hunt chapterhouses and owning only as much as he can carry on his back. He rarely stays in one place for long, since his abrasive and violent attitude begins to grate even on other shikari after a time. Deled was leading a Wyld Hunt against a Western island known to hold an Anathema and a sympathetic mortal populace, when the Solar circle lead by Red Lion shattered his fleet and sent him packing.

When Oberen offered Deled and his shikari a chance to settle their grudge against the Solars that had twice thwarted him, he jumped at the opportunity. Unfortunately, the Second Battle of Mishaka ended only in defeat and dishonor for Deled as he was laid low by Prism of Truth and his shikari turned traitor. Deled was returned to the Realm forces at the conclusion of the battle, and his long recovery is likely to be filled with thoughts of revenge. 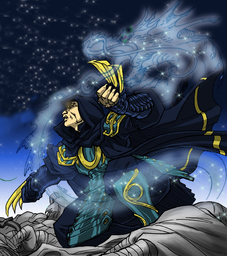