A Realm ambassador to the Wavecrest archipelago

Dorian is a young Dragon-Blooded duelist known in Wavecrest for his fairness and compassion for the locals, as well as his several illegitimate children by native women.

Peleps Dorian is the House Peleps ambassador to the Wavecrest Archipelago, a chain of islands in the West allied with the Realm. When the circle attempted to contact the Realm in order to bring the plight of Luthe to their attention, Dorian led an attack against them with a contingent of mortal soldiers. Despite his obvious skill as a swordsman, Dorian was taken out of the fight very quickly and saved only by the intervention of his cousin, Peleps Deled, one of the high shikari of the Wyld Hunt.

After the disastrous attack on his island by Anathema, Dorian was reassigned from his comfortable diplomatic position to a far more demanding position as a naval courier-captain. Unfortunately, this position brought him to Thassa, where he ran afoul of the island’s Solar queen, Lyta. Dorian was cast into an oubliette until a proper sacrificial altar could be built, only to be rescued by Snapdragon, to whom he now feels a debt of honor. 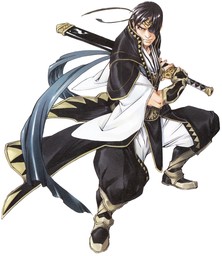