A Voidbringer and apostate, champion of the darkness to come

Armed with the adamant daiklave called The Apocalypse Codex and a forbidden voidtech artifact known as the Basilisk Field Generator, few apostates are as well armed and equipped as Perpetual Entropy Engine. He commands the loyalty of a legion of Voidbringers, numerous cult cells, and limitless numbers of gremlins.

Perpetual Entropy Engine was once a Champion of Yugash, an Orichalcum Caste called White Blade of Progress. He and Gloriously Cerebrant Ordinator were close friends at the beginning of the Elemental War. It all fell apart when the growing curse of Clarity warped _Blade_’s mind, causing him to conclude that the Great Maker was dying and the only logical course of action was to explore the power of the Void so that some humans might survive Autochthon’s inevitable demise.

For a time, Blade ran a Voidbringer cell in Yugash, operating across city boundaries. When a Preceptor investigation got too close to him for comfort, he kidnapped the investigator in charge and corrupted her with his charm and intimate tortures. She protected him for a time, but eventually their cell was uncovered and all of its members either killed or driven into the Far Reaches. There, Blade remade himself into Perpetual Entropy Engine, taking on Voidtech charms and becoming that which his people most feared.

Perpetual Entropy Engine was part of the group that was transferred from Autochthonia to Creation by Project Razor. He was apparently sent into the southern part of the East, where he marched against Ochorin Hill with an army of locust-men. Prism of Truth managed to turn him away toward the Realm, but after the Treaty of Mishaka, the Solar circle moved to stop _Engine_’s so-called “Locust Crusade” from reaching civilization.

Calling on the aid of their Alchemical allies and bringing mighty forces to bear, the Apostate was defeated at last and turned over to Gloriously Cerebrant Ordinator’s assembly for judgment. 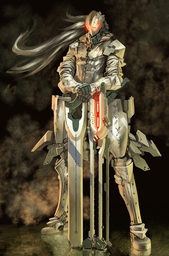