Prince Diamond is a skilled fencer with his red jade and orichalcum blade, Sirocco’s Kiss. He is a masterful gymnast and one of the best riders in the Khanate. His ability to project fire from his sword is a result of his deep bond with the blade, rather than a normal use of Solar magic.

Born a female to the Delzahn people, Diamond grew up in a noble family loyal to the Tri-Khan of Chiaroscuro. At the time of her adulthood ceremony, Diamond chose to take the grey veil of the Dereth, indicating a desire to live as a man instead of a woman. He also took the title of “Prince,” to indicate his descent from the noble line of the Khans. After many adventures, Prince Diamond found himself negotiating peace between the Jackal Tribes of the Southern Wastes, during which he Exalted in a moment of sublime diplomacy.

As a matter of honor, Prince Diamond became indebted to a low-class fight manager in Chiaroscuro. After failing to protect his charge, he became mildly shamed by his peers and chose to become a far rider to abate that shame. Now, Prince Diamond wanders the world looking for wrongs to right and people to help.

Just don’t call him a woman. He doesn’t like it. 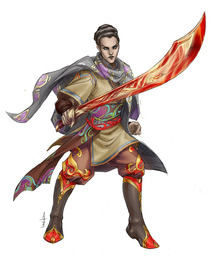