A shining beacon in the dark night of the Second Age, Prism of Truth represents the return of the Solars of old... for better or worse.

Prism of Truth is a tall, bald Western man who normally dresses in the ascetic robes of a mendicant. He wears rough sandals and carries no possessions save for his majestic daiklave, God-Slicing Shard of Radiance.

The West can be a harsh and unforgiving place, as terrible as the deserts of the South or the frozen plains of the North. For one young merchant, his love of the sea turned into a nightmare when a storm whipped out of nowhere and capsized his vessel, leaving him the only survivor—adrift on the wreckage. How long he floated there, he has no idea—long enough to be sunburned terribly, to suffer the pangs of hunger and thirst, to feel fever and delirium. Somewhere in between it all, the sun spoke to him, called him Chosen, named him Exalted. The young merchant had been caught in the wake of the Jade Prison’s opening, and for his heroic resolve in the face of certain death, an Exaltation joined with him.

Taking the name “Prism of Truth”—for it was now his duty to break down the pure truth of the Unconquered Sun’s light into pieces that could be understood by the multitudes—the former merchant began his wandering. Along the way, he claimed a daiklave, mastered his powers, and pissed off basically everyone he met. You see, Prism of Truth isn’t just a zealot—he’s a loudmouthed zealot. He genuinely believes that Solars can do no wrong and spends most of his time working to convince everyone else of that fact. If he weren’t also impossibly lucky and tough, the Wyld Hunt would have had his guts for garters already. Prism recently “adopted” a young Twilight he found lost in the North, and has dedicated himself to teaching the “wayward child” the proper use of his powers.

After returning home to the West briefly, Prism formally disowned his mortal existence and eschewed the family that had thought him dead. He has also claimed an orichalcum warstrider from the armories of Luthe, naming it Sacred Temple of Honest Reflection. 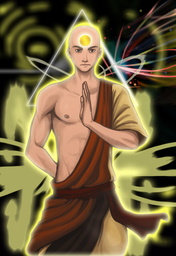