An older Dragon-Blooded, returned from retirement to hunt demons

Ragara Setod is a master of the Earth Dragon Style of martial arts, as well as the First Pulse Style. He is a powerful grappler with stone-hard skin and supernatural strength. His lack of weapons does not render him any less deadly.

Two and a half centuries ago, a boy named Setod was born to a prominent patrician family on the Blessed Isle. At a young age, he Exalted as an Earth Aspect, was sent to the House of Bells, graduated with distinction, married, served in the Imperial Legions, was honored for his service, and came back to the Blessed Isle to engage in his family’s business. He spent a century serving the mercantile interests of House Ragara, with both pen and sword, before looking back across a life well spent by most standards—and finding it empty.

Most of Setod’s family was surprised when he chose to take early retirement to an Immaculate monastery, a fate normally reserved for failures and the reviled. There, he finally found the peace and meaning he had been seeking for two hundred years, in devotion to the Immaculate Dragons and to the peoples of Creation. Setod spent several decades in meditative seclusion before the disappearance of the Scarlet Empress.

At the request of the Mouth of Peace, several of the elder monks of the order, including Setod, have been assigned to travel with the Wyld Hunt. While Setod finds the world outside his monastery a confusing place after so long—perhaps even somewhat frightening—he has obeyed his spiritual leader without hesitation, dedicating himself to freeing the souls of the poor fools who have been entrapped by the false promises of the Anathema.

After the Second Battle of Mishaka, Setod has once again found his faith shaken. Though he knew of the bargains made by his faith with the Sidereal Exalted, he genuinely believed in the Immaculate Virtues. Now, he doubts that all “Anathema” are truly demons. Indeed, he has begun to believe that some of them might be the only hope the Realm has for a future. 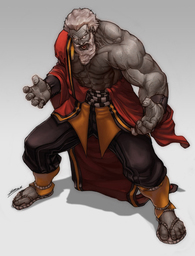