Red Lion the Undefeated of the East

A big-hearted brawler from the East, dedicated to protecting the common people and defeating the Mask of Winters.

Red Lion is a tall, broad bald man who typically goes shirtless and barefoot. He wears one of the nicest pairs of pants anyone’s ever seen, though—a gift from the Unconquered Sun. The left half of his body is covered in whorled orichalcum tattoos, the mirror image of those worn by his Lunar mate, Venomous Spur.

Kick your nuts or twist your wrist.

A pugilist and rough-and-tumble fighter, Red Lion was from a small town in the East that just happened to be in the path of the army of the Mask of Winters. Red Lion led a small contingent of soldiers into the wilderness and found an ancient, overgrown manse. In the battle against a squad of nemissaries that followed them, smelling fresh meat, Red Lion exalted and claimed the manse’s last remaining object of power: a royal warstrider called The Lion’s Roar.

Though he was able to save a few people from the Mask’s deadly rampage, his town was lost. Red Lion deposited the survivors in a nearby kingdom and began his quest to find a way to bring down the Mask of Winters once and for all. In his journeys, he met his Lunar mate, a somewhat eccentric No-Moon named Venomous Spur, who used him in her experiments to better understand the moonsilver tattoos. Red Lion now has a set of orichalcum tattoos, though neither he nor Ven know exactly what they do yet. Red Lion is a jovial, boisterous sort who loves women, wine, and song… which makes him unable to hold a silver for more than a day or two, and has seriously hampered his quest.

THE SUN SHALL ALWAYS RISE

ARMS OF THE UNCONQUERED SUN STYLE

Red Lion the Undefeated of the East 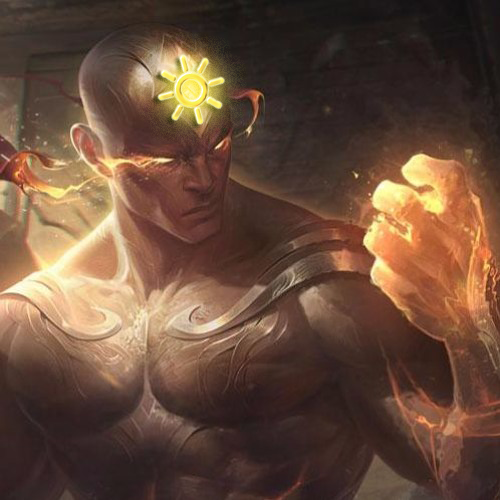