A drunken slacker of a Sidereal, out only for his own enjoyment

Resonant Crystal is a master of the Orgiastic Fugitive Style of martial arts, as well as a student of the Citrine Poxes of Contagion Style. He can manipulate the essence flows of others to induce euphoria, fatigue, nausea, or unconsciousness, as well as purge injury and disease from peoples’ bodies.

Resonant Crystal was a wandering tavern rat and gadabout in the West, sailing from island to island and enjoying himself on the local brew, until he hooked up with High Times, an itinerant drunken monk who showed him the path to personal enlightenment through inebriation. When Resonant Crystal came down from the greatest high of his life, he discovered that his mentor was actually a Sidereal Exalted, sent to guide him into the Five-Fold Fellowship.

As a Chosen of Serenity, Resonant Crystal deeply resents the path his destiny has put him upon. He wants nothing more than to spend his life enjoying himself, so the responsibilities of a Chosen are poorly suited for him. He tends to do the bare minimum to avoid censure, skating through his duties with the least effort possible. If asked, Resonant Crystal would claim allegiance with the Gold Faction, but only because it seems like people did less work under the rule of the Solars. 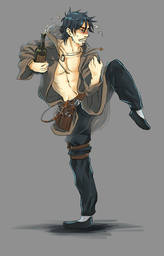