A delicate, petite warrior of Lunar with the ability to tear your head off in two seconds flat

Roaring Mouse was born to a criminal family in Nexus, the apple of her deranged father’s eye. She was raised to be the son he always wanted, hard and dangerous. Eventually, she ran away and joined an elite mercenary unit, surviving both the training and several attempts on her life by her disappointed father. She finally returned to Nexus and killed her father in single combat, taking his criminal empire as her own to use as a network of spies and informants. Roaring Mouse has left the front lines of combat to become a military consultant for several nations and is the “silent partner” in nearly a dozen prominent mercenary companies.

Mouse chose to attend Ven’s moot because she wants to know if Ven and her Solar allies pose a threat to her interests. Her recent experiences have left her keen on looking for solutions to problems other than violence, but she is still quick to fight anyone who disdains her for her small, cute appearance. Mouse is a master of all weapons and a lethal martial artist. She hasn’t met many other Exalts of any kind, and she is more than a little eager to interact with others of her own power. 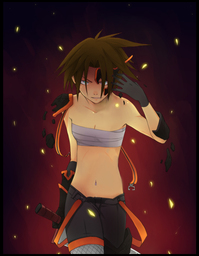