Friend or foe? No one is quite sure with the mischievous and unpredictable Fey.

CN 5th-level rogue… Oh wait, wrong system. What were we playing again? My head always goes sideways with all these dreadful numbers. I do apologize, dear reader, but I’m just not sure what my… what do you call it?… “statistics” are. Come back later, and I’m sure I’ll understand the system better. Thanks ever so.

I get my own video

Rosemaster Kell is a Fair Folk noble of the Court of the Viridian Thorn, a group of fey living in the wilds near Ocho-Rin Hill. He claims to be a freedom fighter, opposing the tyranny of the oppressive Guild, and has entered into a pact with the circle to protect the newly founded freedmen village of Ochorin. In return for his people’s aid in any battle (which must be freely asked for by the people of Ochorin), the Court is given custody of any living prisoners. Kell has also professed his undying devotion to Red Lion, though no one knows if he is serious, or just playing the part of Red Lion’s paramour for more drama.

As of the Battle of Ocho-Rin Hill, Kell got a chance at dinner with Red Lion in exchange for some information about the raksha. He delightfully accepted the opportunity and shed a great deal of light on why the Fair Folk hate Creation so much. 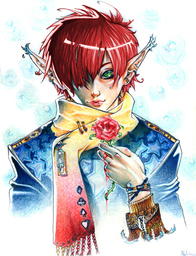