Samea of the Blackwater Mammoth Tribe

Once the high priestess of the cult of the Mammoth God for the Blackwater tribe of icewalker nomads, Samea was Exalted as a servant of the Unconquered Sun nearly fifteen years ago. In that time, she has learned sorcery, refined her essence, become a great spiritual leader, and taken on the role of surrogate mother to all the icewalker tribes of the North. Perhaps her greatest triumph is her role as the primary social and policy adviser for Yurgen Kaneko, the Bull of the North, the great Solar warlord whose career she launched when she chose to become his mentor.

Samea is a quiet, unassuming woman who looks no more than twenty, but she bears the wisdom of many lifetimes. She has forsworn her possessions and obligations from previous incarnations to focus on the needs of the present, something that Yurgen occasionally finds frustrating. Still, the two Solars have a powerful bond, one that makes them both stronger for it.

In one of her former lives, Samea was Queen Amyana of Luthe. She is also one of “The Twenty-Three,” the Solars whose Exaltations were never captured in the Jade Prison. This group also includes her circle-mate, Yurgen Kaneko, and Blazer Orpheus, who was apparently also their circle-mate in his most recent prior incarnation.

Samea of the Blackwater Mammoth Tribe 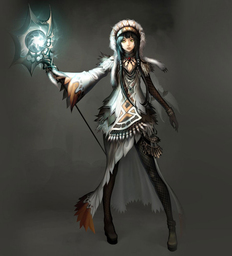